December 07, 2018, 02:29:08 pm
Not sure if this guy has got his hands on some of the mythical road bikes that occasionally raise their heads or if it is just replicas?

Bike Talk / Back in Green

September 03, 2017, 05:52:44 pm
After well and truly being broken by the Ducati, and then having an ultra boring hornet for a while, it was time to get a bike that will get me excited to ride again, which also just so happened to be another Kawasaki!

Ive always liked these, and I am now one very happy boy

It started life as a blue s model, but the conversion has been extremely well done, aside from not fitting 3D tank badge, but ill get that rectified as I absolutely love the 3d kawasaki badges.
I do think the carbs could do with being balanced though as it is a bit too poppy with the stubby exhaust.

May 20, 2017, 11:13:13 am
One of my indicators isn't working at the moment. When the indicator switch is on I get a constant 12V across the wires, whereas the other 3 I get the expected quick flipping between 0 and 12V.
This is on a Ducati that doesn't have a flasher relay and is instead controlled from the instrument cluster with magic

A few little bubbles of lacquer on the bonnet, but paint is fine. Scratches on front bumper and crack in paint on hard roof - all shown in the pictures for open honesty. This is a 20odd year old car!

Well looked after and maintained, but unfortunately I am selling now as a non runner. Last month when going to start it there was an electrical pop from under the steering wheel and no more electrics. All fuses appeared good so I am assuming it is an issue with the after market immobilizer. I simply don't have to time (or inclination in the cold, dark winter) to troubleshoot properly on it. I fully expect just removing the immobilizer would sort it.
Therefore needs to be trailered/ towed away. 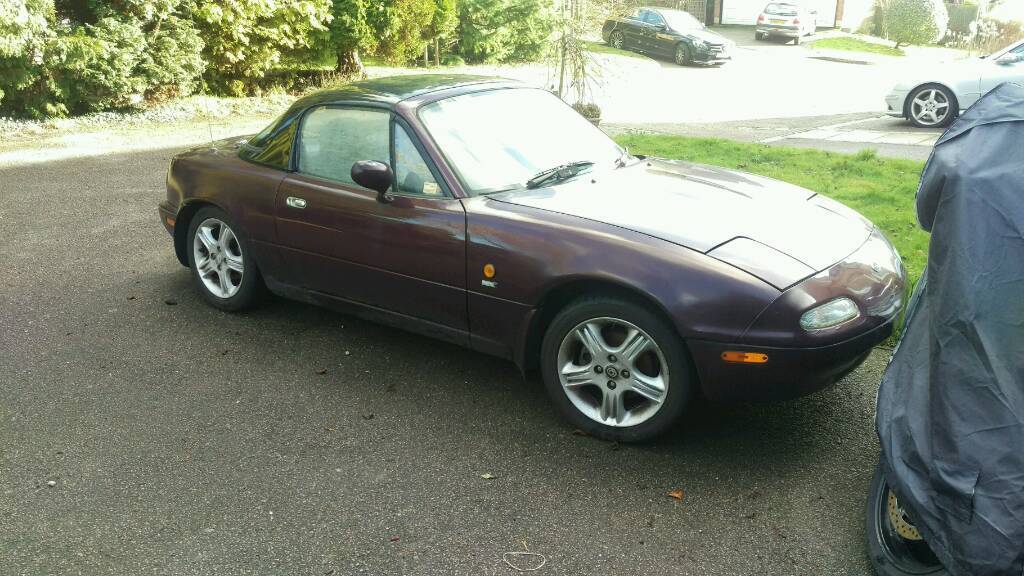 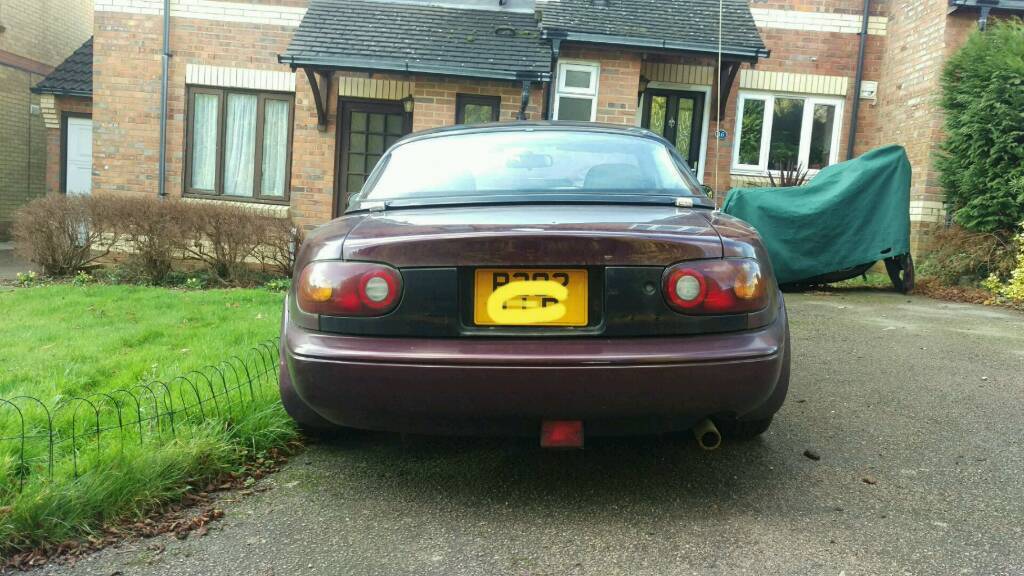 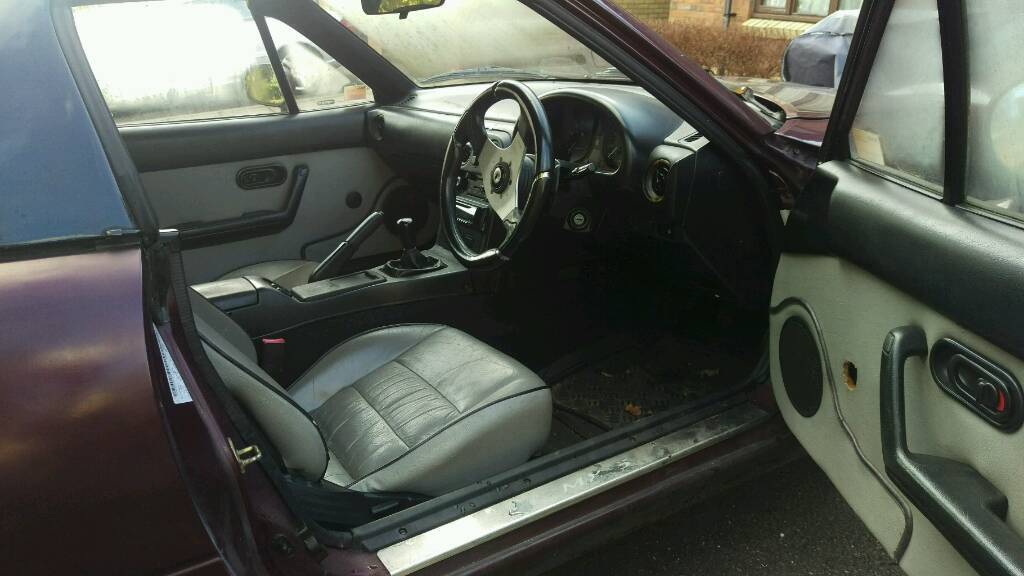 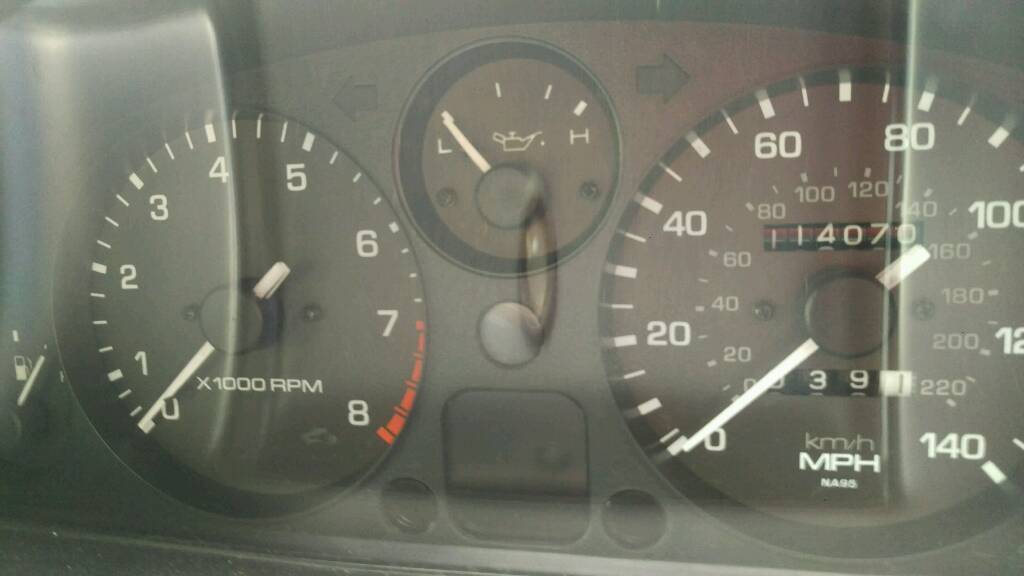 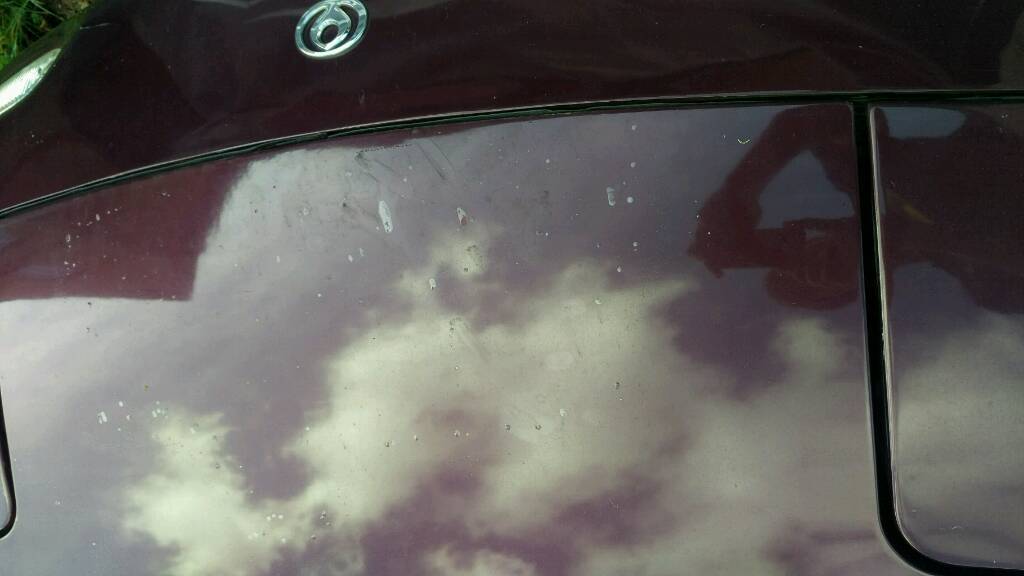 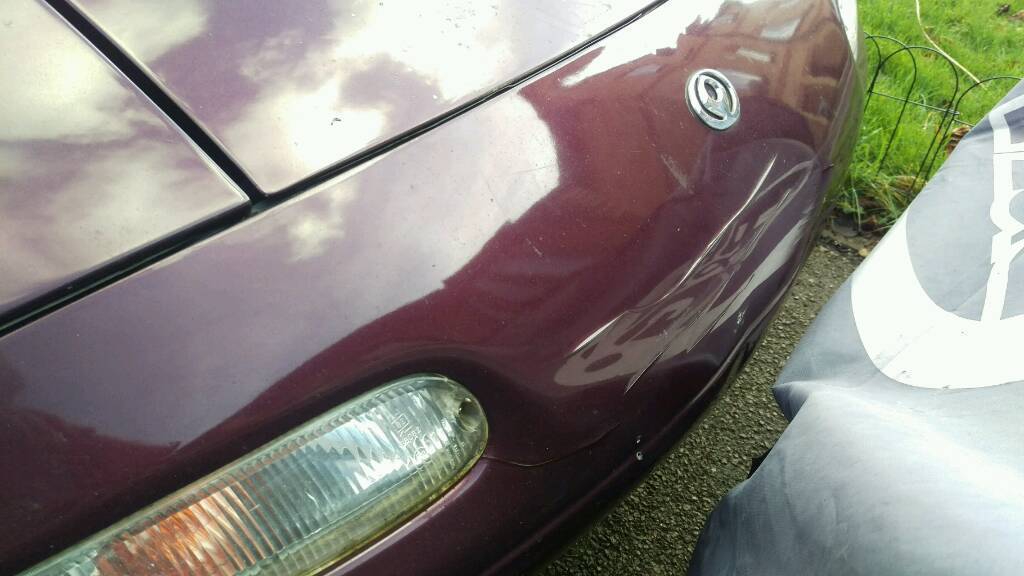 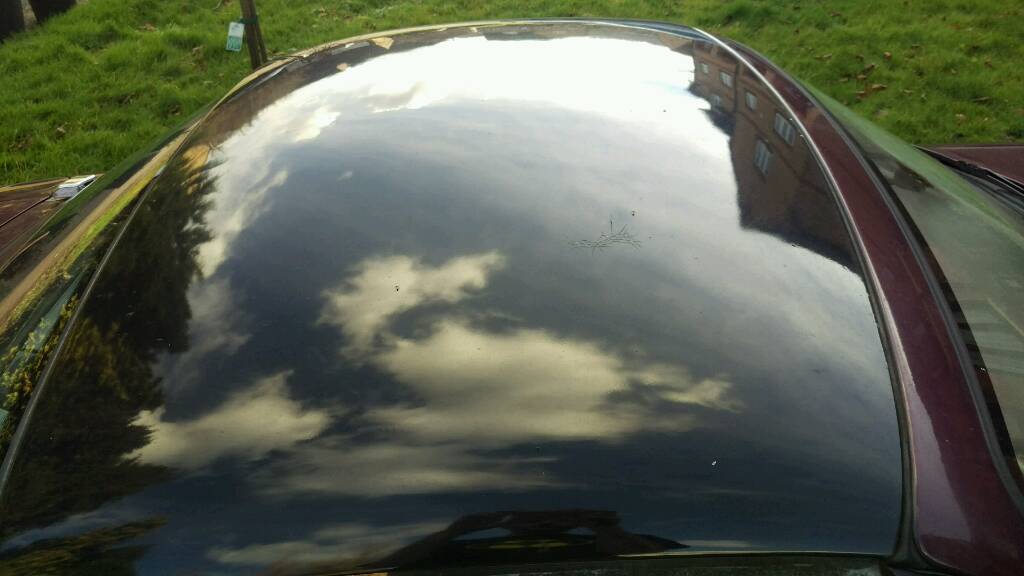 No silly gyroscopes here, very clever.
The rake changes at low speed to make the bike more stable and the handle bars self adjust to compensate for balanca
6

October 13, 2016, 10:53:02 am
All those who have recently bought new helmets must be feeling purreetyy stupid now that you missed out on this bad boy

After being sat in my mums greenhouse for over 10 years, I've finally decided its time to not only bring this back to life, but hopefully make something a bit special out of it too

Most of the cobwebs, dust and general shit had already been brushed off before I started taking pictures. I also forgot to take the first 'before' picture and a lot of the pics are for my own reference for when it comes to putting it back together again.
Todays progress so far....

January 19, 2016, 10:44:01 pm
Yamaha have, for free, a ludicrously detailed paper craft m1 available for anyone that wants to download it, print it off and give it a go!
.....it looks amazing, but likely impossible to complete haha

[edit] ...Apparently they are protesting at having no where legal in london to practice stunt riding!?!

September 15, 2015, 12:25:57 pm
Having to have a bit of a clear out of all my dads old kit. This is just a small sample so far.
All textile stuff. Some of these I dont thing have ever been worn.
Various sized jackets (ill add details later) and all trousers are 34 waist

Black jeans with armour pouches and zips to make into shorts

All available for collection from west London. Completely open to offers. All money will be given to the hospice that looked after him
11

This is most likely aimed at Mark....

Mazda RX8 230bhp in Grey. Around 70,000 miles. Its got big scratches on the font left wing and a dent on the left rear door sill due to people insisting on hitting it whilst parked, but the main issue is the clutch has gone and possibly the coil packs too as it wont tick over properly.

Im having to move house in a month so do not have the spare cash or time right now to get it fixed, so am having to just get rid instead =/ Absolutely terrible timing for me....but thats your gain!!

I dont have any pics of it and likely wont be able to as its stuck in a garage now until I get it gone. Needs to be by this weekend too.

The interior is perfect, full leather heated seats. Even if you don't want to fix it it could easily be stripped and sold as parts for a large profit. The MOT has about 6 months left I think. It has a brand new tyre on the back

I recently had a little holiday in India, and whilst there I naturally hired a Royal Enfield from one of the locals.

It was an absolute heap with dangerously bad breaks, no electric start, reverse gears as well as the lever being on the right foot. I absolutely loved it.

I can fully recommend anyone riding in India. The roads and scenery are incredible. You just need to watch out for cows laying in the road and buses overtaking other buses round corners on the wrong side of the road. All part of the fun.
14

I've stripped the bike to see if I can get to the mechanical part to hit with a hammer, but can't see how it works (all internal I imagine)

Without wanting to just smash it free with a swift few kicks, does anyone have any ideas?
15

May 19, 2014, 03:42:21 pm
Whilst looking to see what time any NW repeats will be on, I stumbled across this apparently weekly bike program on iplayer, called Bikes!

First episode is highlights of cookstown100 then a couple on the NW200.
17 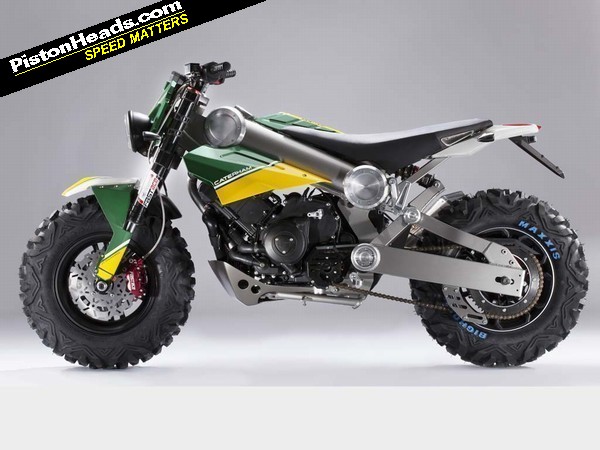 Projects / More of a bit of a tart up

November 04, 2013, 10:26:29 pm
Ive been umming an ahhing about starting this a project thread, as It could only last a page, it could go on for a while. Not really sure.
But though, might aswell.

Just under 2 years ago I bought this Ducati sportclassic from Ireland with about 500 miles on the clock. It had been kept in a barn and this, along with standard ducati built quality meant that it was looking a but sorry for itself. Although you cant really notice it in the pics.
I have only now, just got started with addressing the issues due to...well, laziness.
When I first got it...

Thins I have already done, fitted the standard drop down bars rather than the raised ones it had fitted. Stuck a tail tidy on . That's it.

From when I bought it the fork seal was oozing, and finally, it got to the point where there wasn't any oil left and it didn't really go around corners anymore, so off come the forks. The wheel spokes were also horrifically corroded when I got it, so think I might as well get them respoked too. Leaving me with a bike that currently looks like this.

While im doing the forks, I decided that id prefer a different colour to the standard silver, so have sent them away for a bit of anodizing, and will get them, and the wheels, back in a couple of weeks.

As the forks are changing colour, many little ancillary parts will require a change aswell. I have not completely decided which yet, as ill wait for the forks to come back and see what it looks like, but I have already changed the four little mudguard brackets from black to silver with a bit of rattle can magic.

I have always been disappointed with the sound of the bike. It doesn't rumble and rattle like a dry clutch duke should, but aftermarket stuff is pretty limited on these bikes. I ended up having to get a system for a monster as the heads are the same. It is a QD ExBox and It almost fit as standard, but not quite, so had to file away a little bit of the mounting brackets to make everything line up nicely

The lamda sensor is also on the other side to the original system, so had to re route the wiring and make it look as tidy as possible

Many more things I plan to do to it, and I will update with more pics once the forks and wheels are back on
19

Piss off a massive group of bikers. Smooth move.
Pages1